Looking at the principles put forward by the inventors of the computer, automation was supposed to tackle 3 areas:

These principles are heavily routed in the society of those who created them, reflecting their distain of labour.

In this piece I'm exploring creative uses of automation that purposely contradict these principles while still having creative value. Suggesting that the principles that drive our automative revolution have lost something in trying to remove the human.

The precision of a pen-plotter, an automated drawing machine always fails at reducing error or improving efficiency as it tries to follow a predefined path dealing with the chaotic system of fluids under turbulence. There is no way for the precision to predict the chaotic system. Errors are a product of the chaotic system that cannot be prevented. Embracing the error and chaos is against the principles but in terms of the creative act it is the only way to be a part of the process.

Exploring alternative representations and giving beauty and deeper meaning to the disabled symbol.

Inspired by Vera Molnár's approach of using algorithms to generate a vast variety of forms and then manually finding the interesting ones. Also the http://accessibleicon.org/ project providing alterntive forms of the wheelchair sign.

I generated 1 million glitched versions of the UK wheelchair sign (https://commons.wikimedia.org/wiki/File:Wheelchair_symbol.svg) using a simple SVG corruption strategy. Then manually filtering through the images. 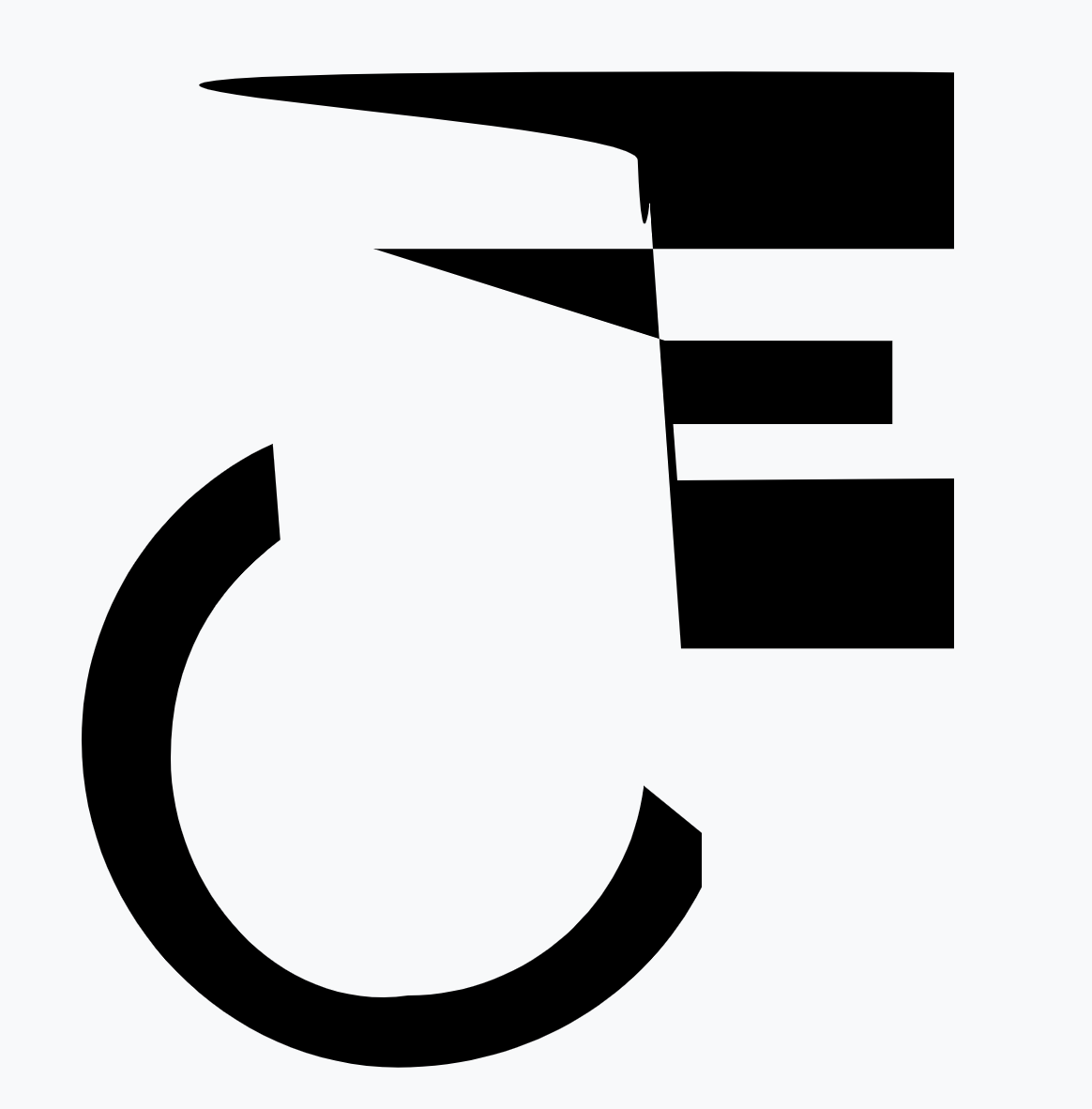 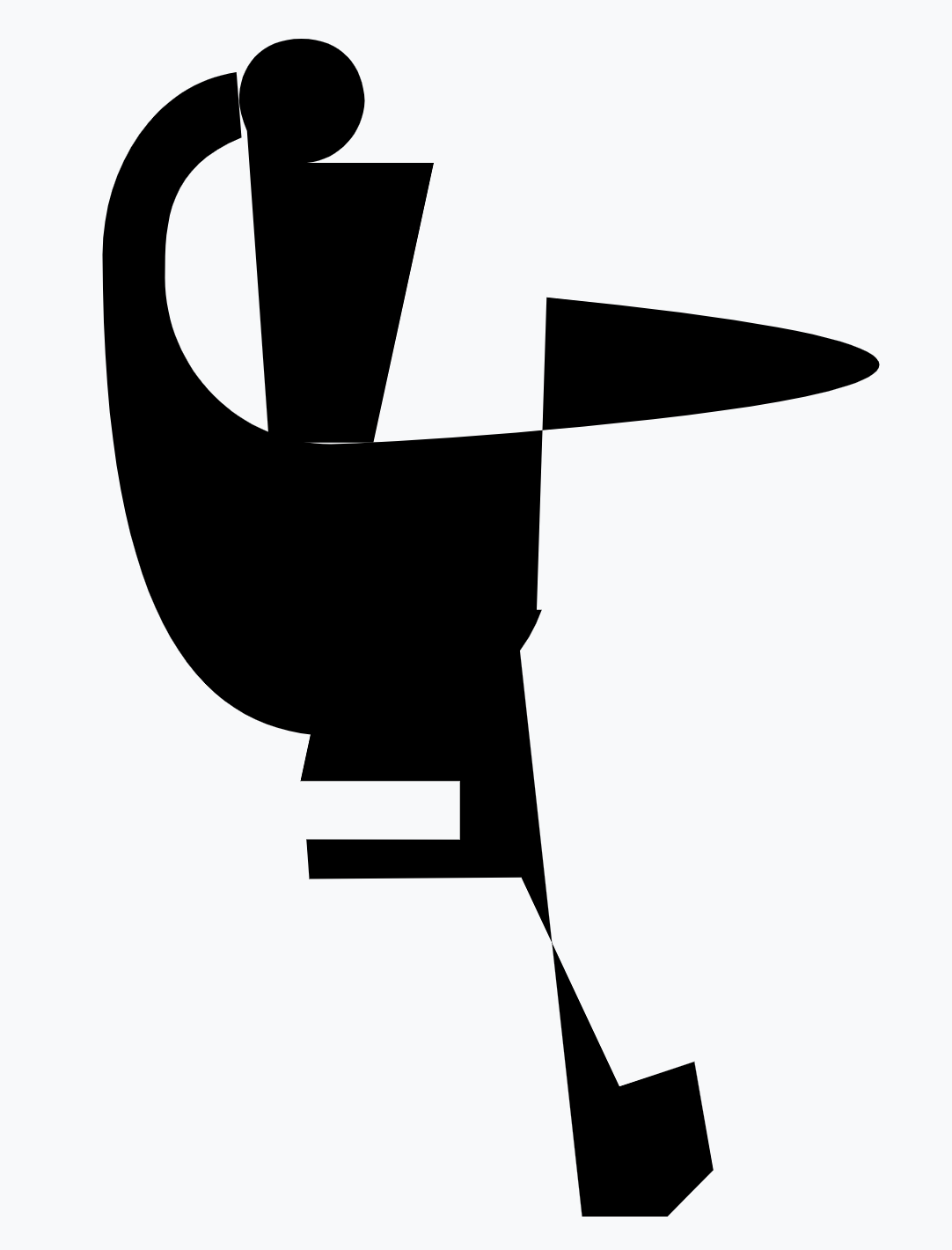 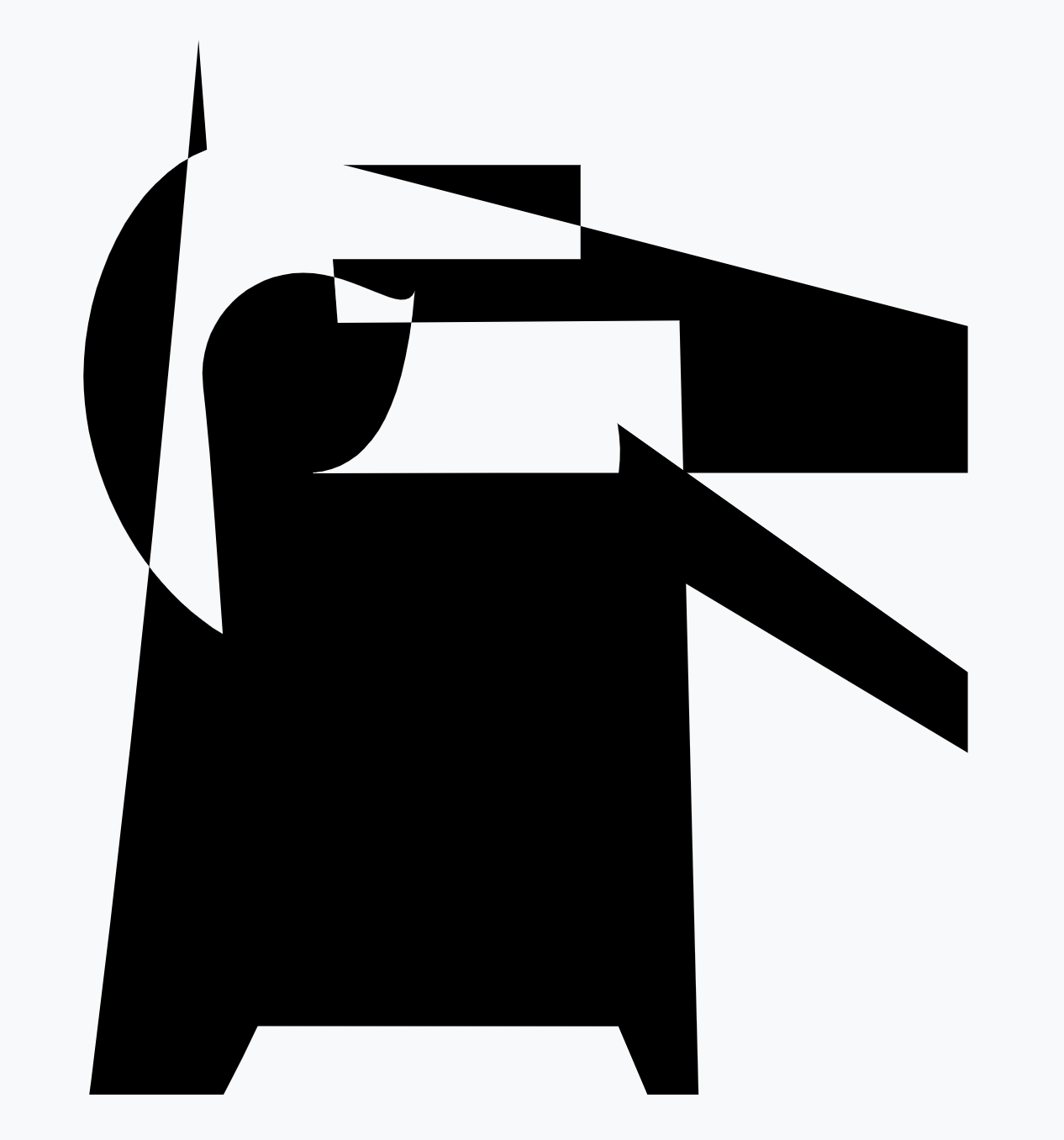 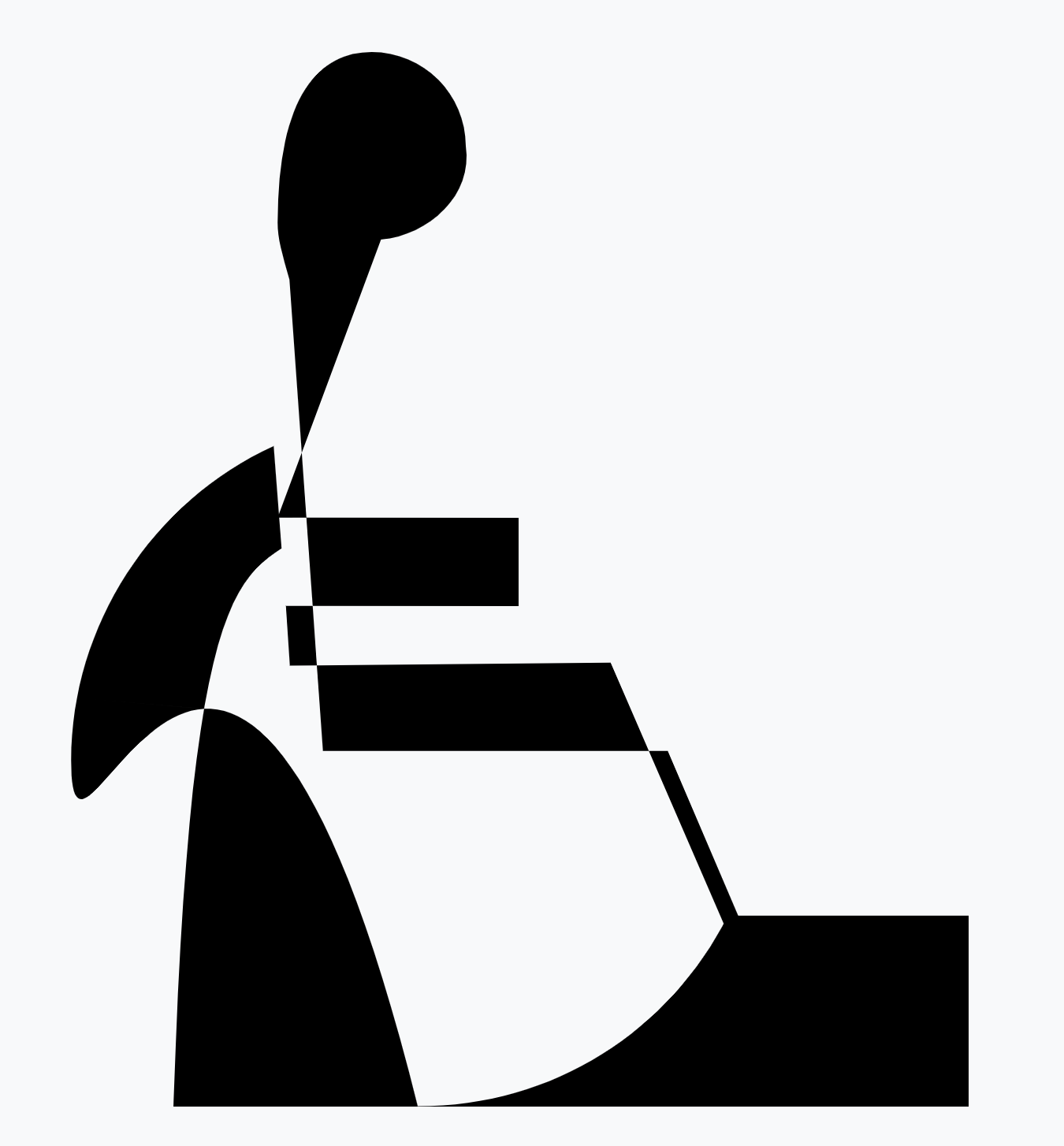 As a remote student to School For Poetic Computation (SfPC), Joseph experiences the people and space of the school through cameras, screens and software. How to be seen attempts to bring the artist into the physical space that he has never physically experienced through an interactive, streamed live coding performance.

The performance consists of a tablet which displays a live stream of the artist. Throughout the exhibition, he writes programming code live to control a second screen — a digitally transformed version of the video stream. The produced graphics use depth and dimension to suggest that the artist’s image is being projected out of the screen and into the gallery space itself.

Initially, viewers of the piece might not understand that the artist is present through the live stream. But this is revealed when viewers pick up the headphones and engage with Joseph directly, interrupting and becoming a part of the performance. Visitors are invited to take “Joseph” in their hands and show him around the gallery, becoming his voice and avatar. Through this interaction, How to be seen explores themes of visibility, control and dependency.

Part of the Dark Matters Zine created for the School For Poetic Computation showcase.

Invisible audio waves with no colour spectrum flow into a computer interface. Through microphones, hardware, undersea cabling & server rooms. Passing through layer upon layer that transmits, stores and records them. All are invisible to the user, the value is delivered but what happens inside the black boxes is unknown. What rights or usages are allowed of the data is lost in 100 page license agreements. Power and control is lost. In the final stages those words are outsourced to automatic machine translation, not just recording but altering them in attempts to turn sound into the written word. Translation using neural networks trained upon datasets consisting of millions of human audio recordings. The speech which started invisible has now been turned into words, a factory of production invisible of the human labour, environmental cost or its history

Explore ways of transforming the way I'm seen. Routed in performance being a way to control the visibility of disability.

Comparing all the emojis of different companies to identify patterns and characteristics. Exludes all flags.

Part of the Bath Fringe Festival 2019. By Mob-Handed Press, series of collaborative songbooks created by selected musicians around a central theme. Artists contribute one song each, which are then anthologised into a zine. This publication is launched with a night of performance and storytelling.

It is a communication between artist and audience, and an exploration of how people visualise the music that they write, perform, and consume.

My submission created through live-coding

A performance I've been working on using SonicPi, Unity3d and Emacs. Trailer:

I've been working on a new live coded musical and visual performance with a heavy emphasis on light and water effects. I've extracted some 8k screenshots from my performance work as Giclée prints (https://shop.josephwilk.net/). Made with Unity3D, SonicPi and Ruby.

I was interested in what sort of ouput we would get from training a wavenet encoder on many voices but treating them as a single voice. Most usages segment this dataset by person, gender and country. I used the GMU global accents database for training.

I have been working on a project to use a sample dataset from the GMU Accent project to create audio and music. The project has over 2600 samples exploring accents from across the world. Everyone is reading the same text which highlights all the sounds of English. There are a huge variety of speakers and native languages with rich meta data for querying. I've been exploring how this dataset could be used to explore communication and language, interacting with human dancers controlling sample parameterisation through sensor feedback.

In exploring the data I did some simple DSP onset detection to extract all voices saying "train station". While very simple, it is deeply beautiful hearing such a wide pallet of voices.

I created a library (http://blog.josephwilk.net/clojure/functions-explained-through-patterns.html) to help explain functions through patterns in color. As a side effect this created a way of creating interesting patterns simply by composing functions. Instead of focusing on explaining functions I explored the patterns I could make.

I've been exploring ways to deform meshes in 3D. The best way in the end was to use a terrain map to alter the mesh positions of a sphere. The terrain map was a blackwhite png where darkness maps to height. Effectively rendering a mountain range into a 3d mesh. Controlled by Emacs and SonicPi. Also using a focus blur for added effect.

Exploring bringing the text of live coding into the generated visuals of a performance. Created using Unity.

Sending midi control data to a live running synth through Emacs. Emacs has a OSC port open which is sending messages to the synth.

Using the cursor position in emacs to control the playback position in a sample. A little like scratching a record.

Snapshots of live generated visuals used in a performance. All the graphics are programmed in the GLSL programming language and that code is executed through OpenFrameworks and ShaderView.

For some unknown reason I'm slightly obsessed with Soprano samples. I've been playing around with the idea of the human ear seeking meaning in a repeated phrase that still has an element of a human voice. I'm using wavetable playback manipulation, playhead speed and some added FM synthesis on a single 4 second Soprano sample.

Snapshots of live generated visuals used in a performance. All the graphics are programmed in the GLSL programming language and that code is executed through OpenFrameworks and ShaderView.

Looking into how machines hear music when trying to identify music. Evolving procedurally generated audio based on the mis-identification of the music. The more popular the artist the higher the weight of the score. (Full technical write up: http://blog.josephwilk.net/art/audio-fingerprint-smudges.html)

Created as part of a live coded performance. I'm writing code as part of the performance overlaid over the visuals. The visuals I'm controlling are someone watching someone live code.

Method missing, the method that does not exist is a magical and confusing concept. I wanted to draw attention to how counterintuitive this method is and the pain of many programmers trying to understand the behaviour of code using it.

When searching text in Emacs, matching terms are highlighted. I wanted to explore creating visual patterns through writing regular expressions. I compressed a section of performance code and then in emacs created different searches.

I wanted to expand the expressiveness of patterns with Emojis rather than text. To add an extra level of meaning for the audience and for my own mnemonics of mapping different types of percussive hits. Parameters like attack, release, velocity and sustain being different Emojis.

Clojure supports a very flexible naming convention for namespaces and functions. I used this in a live performance to exploring using ASCII art to give a visual meaning to the containers of functions.

Emacs is a editor used primarly by programmers thats heavily optimised to write and manipulate text. Here I take its text manipulation power and use it to create animations.

Using the Sound Engine SuperCollider I'm sending messages to Emacs which contain the frequency. This is then rendering in a scrolling Ascii graph.

Converting live metric data from SoundClouds production systems into a mesh in OpenFrameworks. The connection of mesh vertexes is slightly random which creates interesting shapes between graphs peaks and troughs.

Telemetry generate by the data pipeline at SoundCloud. Graphs generated with https://prometheus.io.

In most performances when I live code visuals and music the controlling code is overlaid over the top of the visuals. I've been experimenting with how to bring the text into the visuals rather than just sitting on top of it. To do this I used OpenFrameworks I created meshes from black and white screen shots of text. Then adding noise to the text mesh creating interesting distortions. Making the text feel more organic and alive while still being readable.

An experiment using a texture with transparent cutout text overlaid on top of a GLSL shader. Slight distortion on the edge of the text to better connect with the background texture.

The DarkSeaHorn and Fallout Synths I implemented in Overtone.

Mointoring a live SoundCloud production service by listening to the health status mapped to piano pitches. Low notes are good, high are bad.